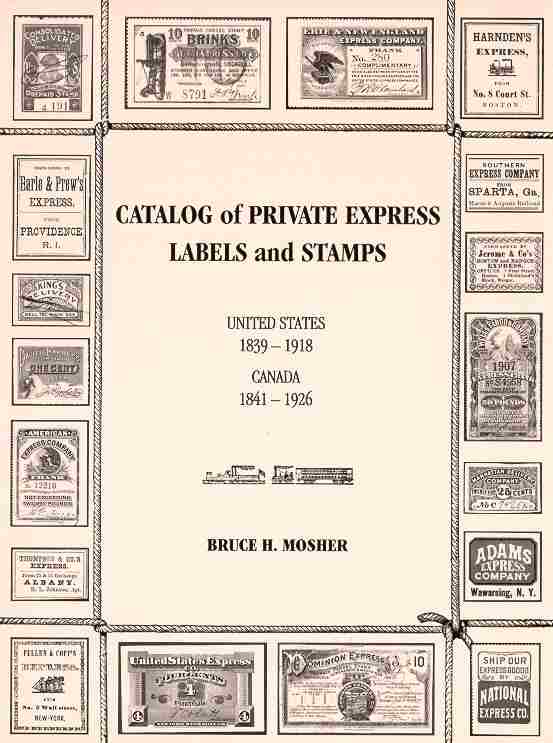 Tremendous interest for various fields from Local to National Postal History, Express Companies, Cinderellas and even some Forgeries.and Bogus

This book presents the development of the early railroads in a historical context focusing on the establishment, routes and the cities and towns served as it relates the philatelic information. The mail contract route information is presented in a well-organized manner including dates, route numbers, contract agreement and cost per mile. The arrangement is by state accompanied by charts, copies of detailed maps locating town and a detailed list of the stations served on the various mail contracts.

The mail contracts normally have the individual stops and dates thus one may be able to bracket in time when a specific station was in use.

This book runs 1,096 pages. in full color, hard bound, dust jacket, illustrates 242 covers, 582 maps and 360 other images. A DVD is included containing over 800 covers many are not illustrated in the book, PMG annual reports and other reports to Congress between 1817 and 1878, these run about 10,000 pages. Also included are images of the manuscript Railroad Contracts by States, 6,773 in all. We think these contracts have never been reproduced before.

Additional philatelic information is presented through the many covers included in the text that were carried by railroads in each respective states. These are described in detail and the appropriate references are included to assist philatelists in their research.

The Western Express Companies, Their Franks and Hand Stamps

WESTERN EXPRESS, journal of the Western Cover Society, the content and scholarship is every bit up to that oof the CRONICLE but limited to the West.

Railway Post Offices of California and Nevada by Rod Crossley Details construction of the lines, the development of RPS, known markings. 1991, 204 pages, card, $35.00, sold out

Nebraska Railway Post Offices by William F. Rapp Maps of all routes with many illustrations of cancels and covers. 1995, 129 pages, cloth, $29.00

The Milwaukee & Mississippi R.R. and its Postmarks by Roland L. Hustis 1952 reprint from the AP, 10 pages, self cover, limited sotock, $8.50

Historical Supplement to U.S. Route & Station Agent Postmarks A major addition to the book as it gives a most useful thumb nail sketch of the Roads along with maps. 1986, 124 pages, spiral bound, sold out

Fresno and San Francisco Bicycle Post of 1894 by Lowell B. Cooper Detailed study of Banta's postal and philatelic local. The The Pony Express, A Postal History, by Richard Frajola, George Kramer and Steven Walske, Census of all recorded Pony covers, complete trip listings, details of postal and historical operations, detailed maps, most known covers are illustrated, 2005, 176 page, mostly in color, cloth, $45.00 Fargo activity during the ARU strike are also covered.

Stagecoarch East, Stagecoach Days in the East from the colonial Period to the Civil Way by Oliver W. Holmes and Petr T. Rohrback, 1983, 220 pages, cloth but no dj, one copy available, $25.00

The Traveling Post Offices of Uruguay by Jay Grace Walmsley, A wonderful story of the systems covering the Stage, Maritime and Trains with much history and detailed coverage of the markings, 2012, 135 + 4 pages, in color, cloth, edition of 80 copies, 3 copies available, $70.00